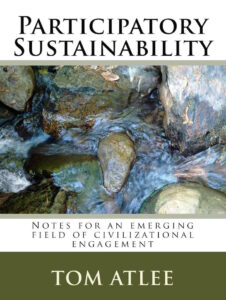 Very few people have read my compact book PARTICIPATORY SUSTAINABILITY. Recently, on re-reading it, I was surprised to find it contains a remarkable amount of my current thinking. Not wanting to have that slide to the side, I thought I’d share at least the first chapter in several mailings to you, to give you a taste of it. If the response is enthusiastic, I will share more of the book on this blog. – Tom

[PS: several people responding to my last post wondered how to get a wise democracy pattern card deck. You can order one here.]

In 21st century human society, sustainability has come to refer to maintaining current economic and political systems – including economic growth – while keeping in mind the needs of the environment as much as possible. In contrast to such “weak sustainability“, advocates of “strong sustainability” say we must significantly alter our economic systems and probably other social systems as well in order to accommodate the needs of natural systems and future generations.

The common definition of sustainability from the Brundtland report* – meeting the needs of the present without compromising the ability of future generations to meet their needs – can be interpreted from the perspective of either strong or weak sustainability.

Weak sustainability rests on predominantly Western ideas about development in which the goal is for everyone in the world to have the kind of material prosperity that characterizes middle and upper middle class people in Europe and the U.S. “Sustainable development” in this paradigm seeks a kind of economic growth that could produce and maintain such material prosperity. This worldview assumes tribal and traditional agricultural cultures are less developed and need to be brought up to date and “integrated into the global economy”.

This linear-developmental model rests fundamentally on the perspectives and capacities of elites rather than the sensibilities of ordinary people, so tends towards elitism and top-down management. However, scientific understanding of complexity as well as the pressures of global competition provide a nascent counter-trend that leans towards cooperation and self-organization even within corporations and governments.

Advocates of strong sustainability suggest that sustained material affluence of the kind envisioned by weak sustainability advocates is unrealistic on a finite planet. They believe that its pursuit will not only destroy the living systems upon which the economy depends, but also undermine the development of cultures and lifestyles that are intrinsically more meaningful, happy and sustainable. They see value in all forms of society – tribal, traditional agricultural, and technological-industrial. Our developmental challenge, from the strong sustainability perspective, is to integrate the best of all these forms of human civilization into new and better forms that function well within the physical constraints of nature.

Thoroughly addressing this challenge would require a far greater respect and even reverence for the non-material dimensions of nature and humanity. Strong sustainability implies a radical shift in the way we see the universe and our place in it, accompanied by shifts in our cultures and social systems. Included in this vision is effective support for the healthy continuity of more fundamental forms of human society as found in tribal and traditional agricultural communities, as well as new forms of technological-industrial society that are environmentally and socially benign.

Participatory sustainability is a form of strong sustainability that provides compelling guidance for sustaining human communities and societies within a 21st century scientific understanding of complex adaptive living systems and a deeper realization of human needs that transcend the reductionist views of economic materialism and consumerism.

The participatory sustainability worldview is grounded in certain assumptions about participation and interconnectedness, perhaps most notably in their ubiquity and inevitability.

All entities and dynamics are related to all other entities and dynamics. Although in any given case some relationships may be considered more obvious and important than others, certain subtle overlooked relationships often turn out to be at least as important as more conspicuous ones. For example, much discussion of climate change notes how rising sea levels will impact lowland populations, properties and cities, but little attention is given to how drought and rising seas will impact nuclear power plants which are mostly situated by rivers, lakes and oceans because they need continual massive water supplies to cool their reactors. Or consider how the self-immolation of an otherwise unknown street vendor – inspired by his frustrated relationships with authorities – set off the uprising known as the Arab Spring.

Even the most remote factors are always at play and although their effects may be virtually invisible, our humble assumption of and respect for their presence can help us maintain a state of alertness to notice faint but relevant signals before things get out of hand.

Relationships affect functioning. Relationships support or undermine our ability to survive and thrive. The action of one entity or dynamic shapes the contexts in which other entities and dynamics function. Relationship is the dynamic through which evolution functions, and thus our need for and consciousness of relationships are deeply embedded in our DNA and psyches.

Almost all relationships are at least two-way, interactive and co-creative. If predators are too successful, their prey vanish and the predators starve. If prey are too wily to be caught, predators die and the population of prey explodes into starvation. To sustain themselves, predators and prey must be in a basic, if fluctuating, balance.

This pattern of interactive relationships is ubiquitous. Diverse elements and life forms co-create our atmosphere, oceans, and climate in dynamic proportions that support or undermine human civilization. Passivity and oppression feed each other. Audiences and musicians energize each other. Polarized values like equality and freedom dance eternally around an invisible balance point. Persistent growth erodes the resources that support it, undermining growth. All aspects of reality participate in and co-create all other aspects.

Humanity is an important part of all this – especially when it comes to collectively sustaining ourselves. We are all playing roles in the development of technology, race relations, gravitational fields, children, economies, planetary weather, and even the health of people in Tasmania in the year 2057. Every single person in the world unknowingly conspires with every single green plant to maintain the right mix of oxygen and carbon dioxide in the atmosphere to sustain life. Every citizen who stays home on Election Day participates – along with every voter – in electing their president, prime minister, mayor or other representative. Everyone who picks up trash on the street – or leaves it lying there – plays a role in determining whether or not the next piece of trash falls on the street.

Our beliefs, cultures and social systems shape our participation and extend the consequences of our actions in ways that can be hard to see. Our belief in the competence of a child may itself increase the competence of that child. A culture which assigns status to financial wealth and material possessions will promote our collective destruction of natural systems and exhaustion of vital resources, though we may individually experience that as simply shopping for Christmas. A regional development plan that features widespread suburbs will cause its subsequent occupants to rely heavily on automobiles and thus, in their daily life, to unconsciously influence the geopolitics around energy-rich countries, the condition of the atmosphere, and the livelihood of farmers a world away as floods, droughts and unpredictable weathers related to climate disruption destroy their crops, which in turn raise the cost of papayas and rice in distant cities and suburbs.

We are active participants in everything that happens, even when we think we’re “doing nothing” and even when we’re totally ignorant of what’s going on. We are never merely irrelevant observers, spectators or bystanders or “just living our lives”. Each of us is right now actively participating in the world’s unfolding into its future.

One Response to "Introduction to Participatory Sustainability – Part 1"